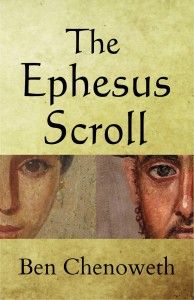 From the back cover:

In 93 AD, Loukas, the son of a wealthy Christian trader, is entrusted with a scroll to read in seven churches in Asia Minor. However, the scroll sparks rebellion wherever he goes and the Roman authorities attempt to track him down. But all Loukas wants to do is complete his mission and get back to Ephesus and his fiancée, Iounia.

In 2005 AD, Dima and Natasha, a young Russian couple from St. Petersburg, come across a stone box with a scroll inside, apparently found in Ephesus by Dima’s great-great-grandfather. The scroll is a complete – and early – copy of the book of Revelation. How did this scroll come to be found in Russia? And has it come to light at this very time for a reason?

The Ephesus Scroll is an exciting historical novel with interlocking timelines that simultaneously explore the questions “What did the book of Revelation mean to those who first received it?” and “What does it mean for us today?”

What scholars are saying about The Ephesus Scroll:

“[The Ephesus Scroll] forges two horizons. The first is set in the late first century AD, when a courier is entrusted with a scroll containing the Book of Revelation to be read in the seven churches of Asia Minor. These churches are facing bitter persecution from the Roman Empire. The second is set in the twenty-first century AD when a young couple come across a stone box discovered some time ago in Ephesus and which contains an early copy of the book of Revelation… The novel shows how the text of Revelation, with its ominous warnings and great encouragements, related directly to the experiences of these early Christian communities. Along the way he provides a credible explanation of the contents of the book of Revelation, rooted in the historical context and reflecting sound New Testament scholarship. It is one I find compelling. ”

“Ben Chenoweth is passionate about helping his readers get in touch with the Bible and its original writers and context… The Ephesus Scroll is an entertaining historical novel about a scroll of Revelation. It alternates from the world of the early church to the contemporary church, from persecution in Asia Minor to a growing church in modern-day post-communist Russia… I appreciated the entertaining travel narrative in The Ephesus Scroll and loved reading the journey from Patmos to Ephesus, and from early church to contemporary Russia. For anyone interested in learning about how to read and understand the Bible, especially some of its ‘weirder’ apocalyptic bits, this puts the issues into an entertaining narrative form.”

“A ‘textual thriller’ and a ‘scholarly action story’! I enjoyed the interwoven narratives and interesting keys to interpretation. This is a creative way of presenting an otherwise obscure understanding of the ‘scroll’ to the public consciousness. Fascinating insights on the interplay of the impact of the scroll on the churches, and on the beasts, and therefore on the scroll’s own fulfilment! May we be found faithful!”

This site uses Akismet to reduce spam. Learn how your comment data is processed.